Smoked salmon and an array of fresh summer vegetable( like tomatoes, green beans and cucumber) are artfully arranged on a bed of mixed greens, accompanied by purple potatoes, hard-boiled egg and a French dill vinaigrette. Perfect for a light, healthy summer meal. Salad ingredients can be prepped ahead of time making this a good choice for your next get-together or party as well.

The classic Niçoise (pronounced nee-swahz) salad hails from the southern part of France, from the town of Nice. In fact, that’s where the word “Niçoise “ comes from, it means having been created or native to Nice, France. (there’s your fun fact for day!)

There seems to be a fair amount of debate over a few specifics regarding the original Niçoise salad, like:

1. Was it traditionally served as a composed salad (toppings arranged artfully on top) or a mixed salad?
2. How about the base of the salad?…it’s been debated that it originally was tomatoes vs. lettuce
3. Should the Niçoise be made with fresh tuna or canned?

There are a few facts though that seem to run true in all versions of the Niçoise salad; it’s beautiful, it’s tasty, and it’s made with fresh summer vegetables found at the market (and topped with a French vinaigrette dressing). 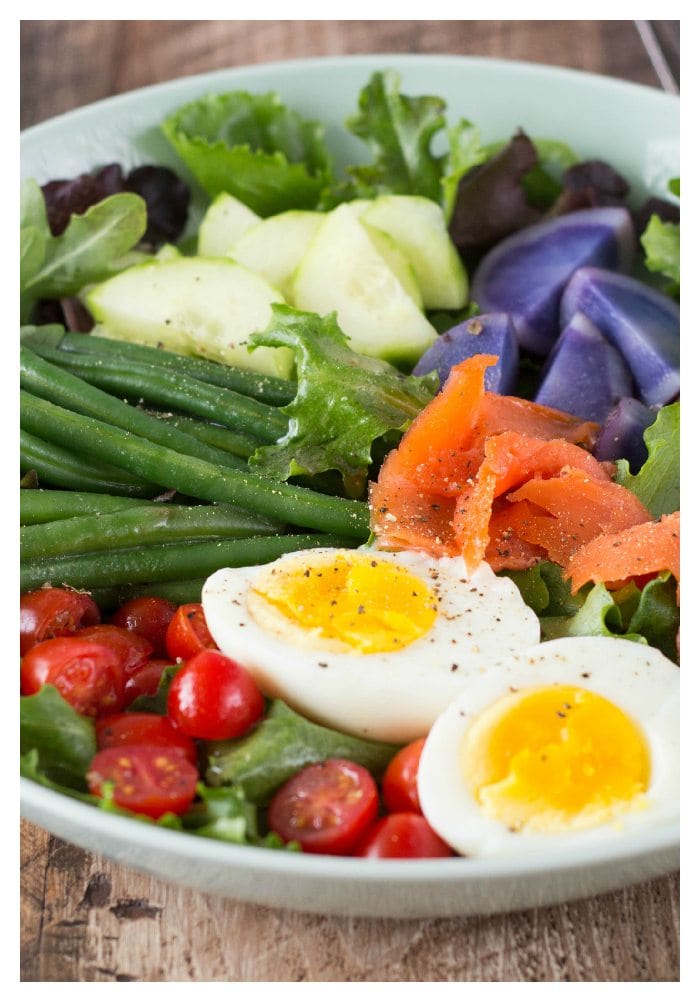 I’m skirting the tuna debate entirely and featuring smoked salmon in this version. In keeping with the French tradition of using fresh vegetables from the market, I’m topping (composing) the salad with in- season tomatoes, green beans, and cucumber. Hard boiled eggs and purple potatoes complete this colorful salad.

I’m using purple potatoes because I just love the color and the contrast of the purple with the bright pink salmon and green veggies. Oh course, you can substitute any other variety of small potatoes if you wish.

The dressing for this salad is a version of a French vinaigrette with the addition of some dill, which pairs really nicely with the smoked salmon.

O.K…hold on one quick moment…….pop!  fizz..fizz.. That was me pouring myself a nice glass of chilled French champagne (which I highly recommend) to accompany this Smoked Salmon Niçoise salad. Now just imagine you're on a terrace of a French brassiere in the South of France... Bon Appétit !