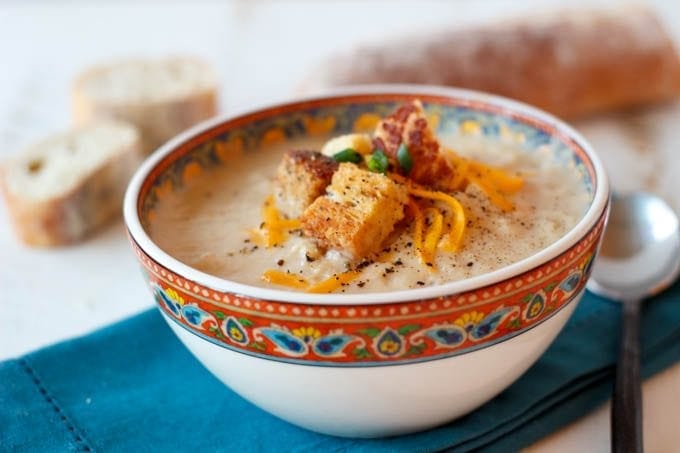 It’s One Pot Wednesday..today’s easy, one-pot meal idea : Creamy Cauliflower and Cheddar Soup.
This soup is a bit like an optical illusion. Where you see something one way, but in reality it is something different. In this case, the soup is SO creamy you would swear it has to have cream, and a lot of it! When in fact there is no cream at all ! The magic happens when you puree the cooked cauliflower and sprinkle in some cheddar cheese. Yum Yum GOOD!

You’ll start by cooking some chopped onions in a tad of butter in a large soup pan. I’d normally say skip the butter and substitute some olive oil, but I think in this case it just helps the overall flavor of the soup. Just sayin’ …everything in moderation, right? (Oh course, if you’re so inclined ..by all means substitute for olive oil, or whatever you wish. It’s still going to be out of this world GOOD!). 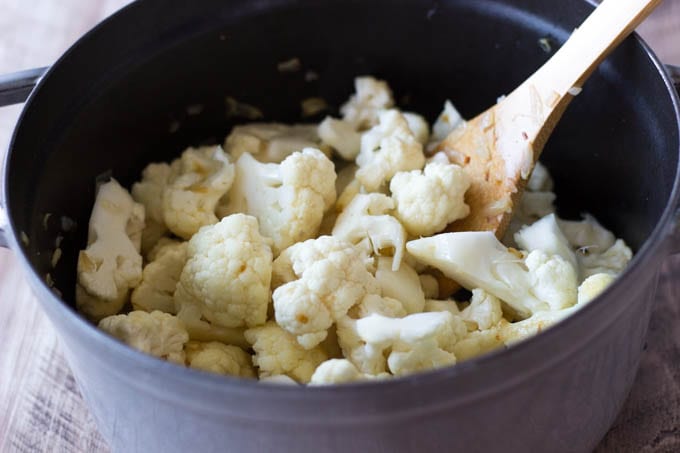 To keep this recipe to a true one-pot…you’ll need an immersion blender to puree the cauliflower in the same pot until it’s smooth. No worries if you don’t have one, you can always use a blender or a food processor, you’ll just want to process the cauliflower in batches.

This soup has become my “go-to” when I want something filling and delicious, but don’t want a lot of calories (1 serving has about 150 cal.) . I’ve been making a big pot of it on the weekend and having it though out the week. For that reason I decided an immersion blender would be a nice addition to my ever growing kitchen gadget collection. ( see, I can rationalize any gadget purchase ..hee hee) I got this one…the Cuisinart Immersion Blender in the brushed chrome color. It wasn’t until after I had already ordered it that I discovered it comes in a ton of colors. Even a color called “pink champagne” which is exactly what it looks like…all bubbly and classy with a hint of pink…dang! (disclosure- both of those links are affiliate links and will take you to Amazon to check out Cuisinart Immersion Blenders in many colors).

The final step is adding in the cheddar cheese and letting it melt and get all fabulous. Top with croutons (or crackers), a sprinkle of shredded cheddar and some chopped chives. Serve with some crusty artisan bread, or along side a green salad, or a grilled cheese sandwich.

I’m thinking to add a little curry to my next batch just to shake things up..because I’m a rebel like that!